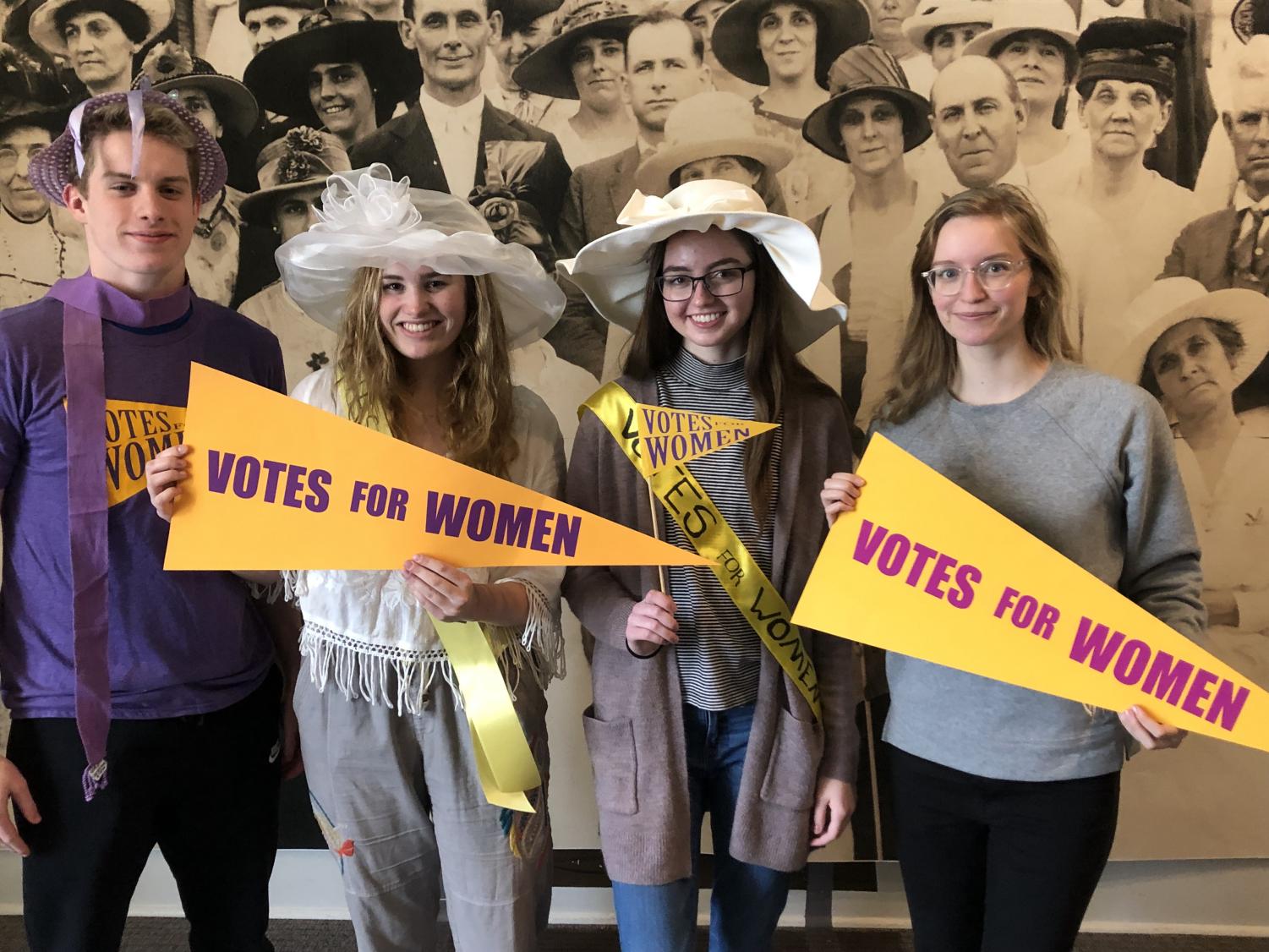 Ethan Marotte (11), Olivia Marotte (11), Elizabeth Ablondi (12), and Elena Wiltgen (12) are apart of the Young Feminist Group at Conway High School. They volunteered at an event that recognized Women's Suffrage and passing of the 19th Amendment.

Ethan Marotte (11), Olivia Marotte (11), Elizabeth Ablondi (12), and Elena Wiltgen (12) are apart of the Young Feminist Group at Conway High School. They volunteered at an event that recognized Women's Suffrage and passing of the 19th Amendment.

A Closer Look at the Misconceptions of Feminism

When I ask boys my age if they consider themselves to be a feminist, I am met with hesitation. If they respond with comprehensible words instead of a chuckle or look of disgust, they might say, “by dictionary definition, yes,” and then perhaps mutter something about how feminism has transformed into something obnoxious and boisterous. Of course most boys appear to support the basic ideals of equal rights; in our history classes we have been taught that everyone deserves equality. If they agreed with the notion that women are inferior to men, they would be perceived as cruel.

So, here is where my confusion lies and my exploration begins: if the dictionary definition of feminism is, and I quote, “the advocacy of women’s rights on the basis of the equality of the sexes,” why do my male peers fear the term so stubbornly and with such close-mindedness? Has the idea of “radical feminism” frightened them so deeply that they are blinded by the reality of feminism and its core goals and ideals? Is “radical feminism” what they are calling the necessary actions that modern women are taking for their basic human rights? So many possibilities, so many questions fill my head.

At first, I just choose to believe that these boys are merely intimidated by the the popularization of female potential and how that could affect their fragile masculinities. Then I realize that, as a woman, it is difficult to accomplish anything with said boys through ad hominem rooted in aggravation and annoyance. That is when I simply ask them why they are afraid of identifying as a feminist. Again, through this inquiry I am faced with question, sometimes an annoyed expression or a laugh.

Almost every boy I have ever asked this simple yet somehow preposterous question tells me that he doesn’t want to be associated with this movement because of how out of hand it has gotten among its supporters; women nowadays are “too angry” which I can personally translate to “unladylike.” These boys who do not tell me that womankind’s endeavor for rights is unnecessary tell me that the feminist movement initially had profitable intentions with regards to women’s rights, but now, they say, it has infused itself into other movements that “don’t have anything to do with feminism.” This argument is the most difficult for me to understand. I ask them to explain further. They say that now, feminism covers a broad umbrella of movements including Black Lives Matter, abortion rights, March for Our Lives, and LGBTQ+ rights.

Instead of getting angry, I decide to take this as an opportunity to think. Perhaps to be a feminist is to support everyone, to lift everyone up, not just women. Feminism has one main goal: to achieve a world in which women are equal to men. While this journey to equality is a difficult one countered by adversity and obstacles in the form of those who deny its necessity such as the boys (and occasional girls) who l choose to argue about it with on a daily basis, it is crucial to support others whose movements and beliefs face the same kinds of hostility, for we all are fighting a similar battle.

No, feminism is not the same as these movements that some argue it to be.

Yes, I do believe that these movements can be compared through their common desire for a peaceful, equal society.

I think that this is attainable. As feminists, we will encounter opposition in our fight for equality, and that is unavoidable; however, we must keep fighting for what we know is morally right by speaking our minds to hopefully open the minds of others. In my case, these minds will be those of my male classmates with my fellow feminists and all other members of movements in favor of a peaceful and equal society in mind.