The Capital: Where Everything Happens 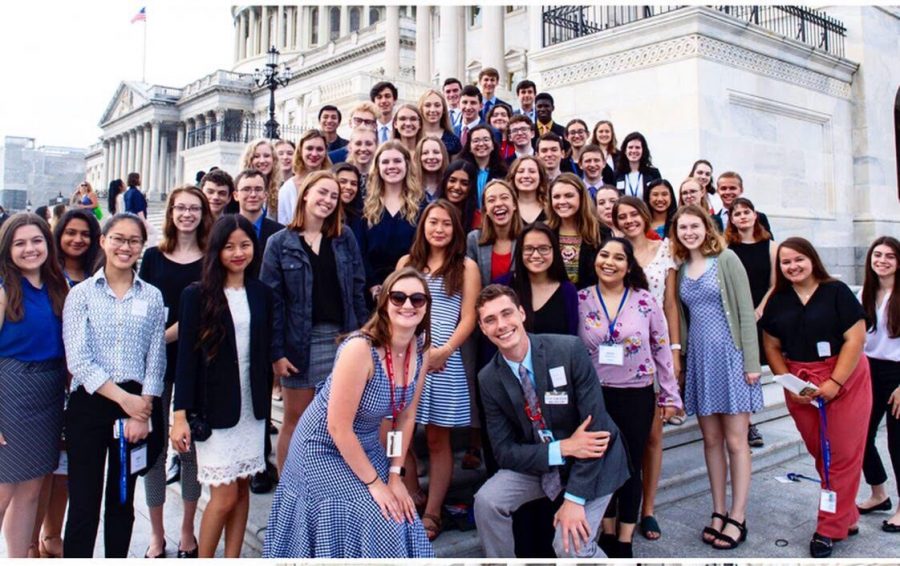 The capital of the states, Washington, D.C., has to be simultaneously the most historic yet modernized city ever to exist. With the White House standing so evidently clear in the darkest of nights, a group of protestors march in front of the historical site yelling their parody of “22” by Taylor Swift but replacing the lyrics with “Impeach 45.”

In December of 2018, I happened to come across a program for rising Seniors interested in Journalism. It seemed to fit perfectly, and as I read more about it, I keenly became interested. The application was a simple one with only two required open response questions, but I worked on them for months as if they were college essays. Only one person from each state was selected for the opportunity for a week-long, all paid trip to D.C. to meet and network with influential people in the field of journalism.

The start of this program began in 1999 by the founder of the national newspaper USA Today. Al-Neuharth’s creation of USA Today reinvented American newspapers with splashy colors, bold graphics, and many never before seen features. He was seen as a risk-taker, utterly diverging from the modern, typical, and mainstream look of journalism at the time. Hence, the Free Spirit Program is for those aspiring journalists who are willing to cross the line, to do what it takes, to be different, to ‘dream, dare, and do.’

I received the acceptance E-Mail followed by packages sent in the mail, helping me to prepare for this exciting adventure. I couldn’t think of a better way to start my summer vacation. The long-travel alone seemed to go by so fast in anticipation of landing in the city where everything happened and where so much more will take place. One person from each state, including the District of Columbia, were finally all under the same roof. I have never seen such a large group of individuals bond so quickly. Maybe it was the commonality of journalism or the excitement entangled within us, but it took no time at all for us to talk, act, and live like a family.

Our days started sharply at 7 AM, where we convened in the lobby of our hotel with allotted time for breakfast before our bus came. All of our meetings and conferences were held at the Newseum – a museum dedicated to news and the First Amendment created by Al. We met his daughter, and her two children, and got an insight into the kind of person he was and the legacy he left. We met with reporters from the New York Times, Washington Post, USA Today, and CBS News. We witnessed a live show of Meet the Press with Chuck Todd while sitting in bleachers at the NBC Studios. We toured the current office of USA Today, where all aspects of a newspaper were all in one room. We listened to two Freedom Riders, a Pulitzer Prize Award Winner, best selling authors, and many more experienced journalists.

Listing all the people I met and the places I went wouldn’t come close to showing how much knowledge and information I gained in those six days. When I had the idea of creating an online newspaper for Conway High, and when Wampus Cat Student News finally became a reality, I never would have imagined it allowing me to grow my passion into a possible career. The Al-Neuharth Free Spirit Program gave me more than just a week-long of conferences and lectures; it gave me 50 best friends pursuing the same passions and striving to be the best in all aspects. They have been a constant inspiration, and the best support system a young journalist in high school could ask for.

Senior Nabiha Khetani is Founder and Editor of Wampus Cat Student News. After finding great interest and passion for journalism during her Sophomore year, Khetani worked hard to get Conway High an online newspaper. She is also involved in National Honor Society, Key Club, Future Business Leaders of America, and Yearbook. She plans to attend the University of Arkansas for her college career.